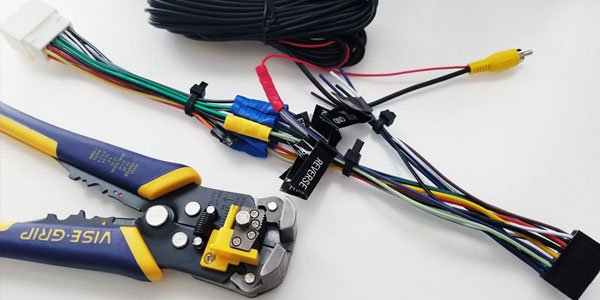 As I mentioned in a previous post, we recently found our truck. Bruce is a 2004 Ford F-250 Super Duty, and because of his age he’s lacking a little bit in the technology department. Installing something more modern than the basic in-dash CD player was called for. I decided to pick up a couple upgrades, so follow along as I install a new GPS- and Bluetooth-enabled headunit and a backup camera.

First up was finding the headunit that I wanted to install. I know I wanted something with Bluetooth so I could easily stream audio and calls from my phone. Next on the list was a backup camera. I’ve never looked for a backup camera before, and let me tell you – they’re really cheap. Installing one is a different matter, but they’re certainly not expensive.

Last on my requirements list was GPS. Yes, we both have smartphones, and yes Google Maps is awesome. The one catch with using your phone on the road though is that when you don’t have a cell signal, you don’t have directions or a map. With dedicated GPS everything is coming through the antenna from a satellite, so you’ll rarely be without navigation.

So with all of that being said, here’s what I ended up ordering:

That headunit fit the bill perfectly – it has everything I was looking for. It also included a backup camera and wasn’t too expensive. If you’ve ever looked at car electronics before you know that the prices can get really high really fast.

Installing a headunit is a slightly involved affair, so I also needed to pick up a couple other things to help me out. I needed an installation kit and wiring harness for my specific vehicle. The RCA cable in the box for the camera wasn’t long enough for Bruce, so I also ordered a really long cable that I knew would reach. In addition to vehicle-specific things, I also grabbed a couple various tools and wiring supplies.

Before heading into the truck, there was one task that I could handle from the air-conditioned comfort of my office. Headunits aren’t automatically compatible with all vehicles. As you can imagine, all manufacturers use different wires and connectors and whatnot. That’s where a vehicle-specific wiring harness comes in.

The black connector with the labeled wires is the set that came in the box with the headunit. Every wire is color-coded and matches a diagram in the installation booklet. The white connector with the unlabeled wires is the wiring harness specific to my truck. It was my job to connect (almost) all of those wires so I could connect the headunit to the truck. That meant a lot of crimping.

Tip: Take your time, keep your work area clean, and put something good on Netflix. This part takes a while.

After all was said and done, it looked like this:

I need to explain a couple things in this photo. First, those wire cutters/strippers/crimpers in the bottom left are AWESOME. Go buy some now! Even if you don’t really need them – just buy a pair and strip wires for fun! Also, you’ll need some eventually anyway, trust me.

Second, that black bundle of wiring at the top is the 10-meter (32-foot) RCA cable for the backup camera. It’s the same kind of cable you used to hook up a DVD player to your TV back before HDMI was so popular. This one is slightly different though – that red wire sticks out of both ends of the cable and is used to tell the headunit when the truck is put in reverse. I accomplished this by connecting to the “reverse” wire from the headunit on one end and to the power wire for one of the reverse lights at the other end.

So with all of this wiring out of the way, it was time to head outside to start installing everything. This particular install wasn’t just a simple swap. Not only was I replacing the headunit, I was also adding a GPS antenna on the dash and a camera way back on the rear license plate. That meant I had to run a couple wires inside and outside the truck. No one wants to see a bunch of random wires running around, so I wanted to take my time and hide them as best as I could.

First up was the easy one, the GPS antenna.

The antenna that came with this headunit was a simple little box with a magnet and some double-sided tape on the bottom. When installing a GPS antenna it needs to have a clear path to the sky. In some vehicles that may mean using the magnet and attaching it to the roof. Luckily this truck has a huge dash with plenty of open space so I was able to put it down in the corner and got a full-strength signal.

Tip: To check proper wiring and signal strength, hook all of your equipment up and give it power before clicking everything together in its final place. Some aftermarket headunits can’t be removed easily after they’re installed, so triple-check your work before it’s too late.

Running the wire was easy as well. There was a nice gap at the edge of the dash by the A-pillar that led down to the area behind the glove box. From there, it was a simple run up to the headunit. The only visible wire is what you see in that photo above. Because the unit needs to be oriented towards the front of the vehicle (otherwise you’ll be driving sideways/backwards on the map), having that little bit of wire visible was unavoidable.

The Long (and Hard) Road

With the easy cable out of the way, it was time to tackle the backup camera. This sucker had to go from the middle of the dashboard down through the floor of the cab, all the way along the bottom of the truck, and then up the back to the license plate. Let’s take this one step at a time.

The space behind the dash in this truck is significant, so getting from the headunit to the floor was simple. My only concern at this point was the cable being close to the pedals and my feet, so I zip-tied it in several places to hold it out of the way. I found a rubber grommet under the carpet that I could drill a hole through that gave me access to the underside of the truck.

Tip: Always exercise extreme caution when you’re under a vehicle. Use properly-rated jacks, jack stands, and wheel chocks to make sure it doesn’t move.

Once I had the cable under the truck it was just a matter of crawling down there and running it along the frame. I found an existing wire loom and zip-tied my cable along that one in a bunch of places. I’d show pictures, but I couldn’t even see what I was doing in most spots as the wire runs along the top side of the frame. After slowly working my way towards the back it was finally time to hook up the camera.

The End of the Line

With all the cables in place, there was one final batch of connections to make. Remember that red wire on the RCA cable attached to the “Reverse” wire coming out of the headunit? The other end of that red wire needed to be attached to the reverse light’s power cable so the headunit would know when the truck is in reverse. I grabbed a couple feet of hookup wire from my workbench and butt-spliced one end to the red wire. The other end was run up to the taillight and quick-spliced it into the reverse lamp’s power wire.

I also needed to attach a power and ground wire from the camera to that same reverse lamp. As you can see in the photo above I used quick-splices for those as well. Quick-splices are incredibly handy when you need to attach to an existing wire and you don’t want to disconnect or cut it for some reason. In this case I didn’t feel like messing with existing wiring so they fit the bill perfectly.

The final step at the rear of the truck was plugging in the RCA cable and positioning the camera. I had plenty of extra RCA cable left over, so I just bundled it up and zip-tied it to the tow package wiring loom to keep it out of the way.

The area in this photo is directly behind the license plate. You can see the red wire butt-spliced to the hookup wire that’s running into the background. The camera’s power cord is also gobbled up in there. Finally, the camera is just attached via the screws that hold the license plate on.

It was now time to do one last test before installing the new headunit in its final home. I ran through a mental checklist of all the new connections and hooked everything up. There was plenty of slack on the cables coming through the dash so I could leave the headunit dangling out while I turned the truck on. I was so focused on making sure everything was working that I forgot to take a photo of this step – I promise I’ll do better next time.

It all worked on the first try! The headunit powered up, I could connect my phone via bluetooth, the GPS signal was strong, and most shockingly the backup camera popped right on when I put the truck in reverse. I was really expecting at least one thing to be messed up but I guess doing things slow and methodically paid off. Now that I had confirmed everything was working properly, it was just a matter of actually installing the headunit.

The headunit opening on this style of F-250 requires a little bit of modification because it’s not true double-DIN size. After a bit of plastic trimming and some choice swearing, installing the new unit was a breeze. I fired the truck up one last time and sat back relieved that it was all done. 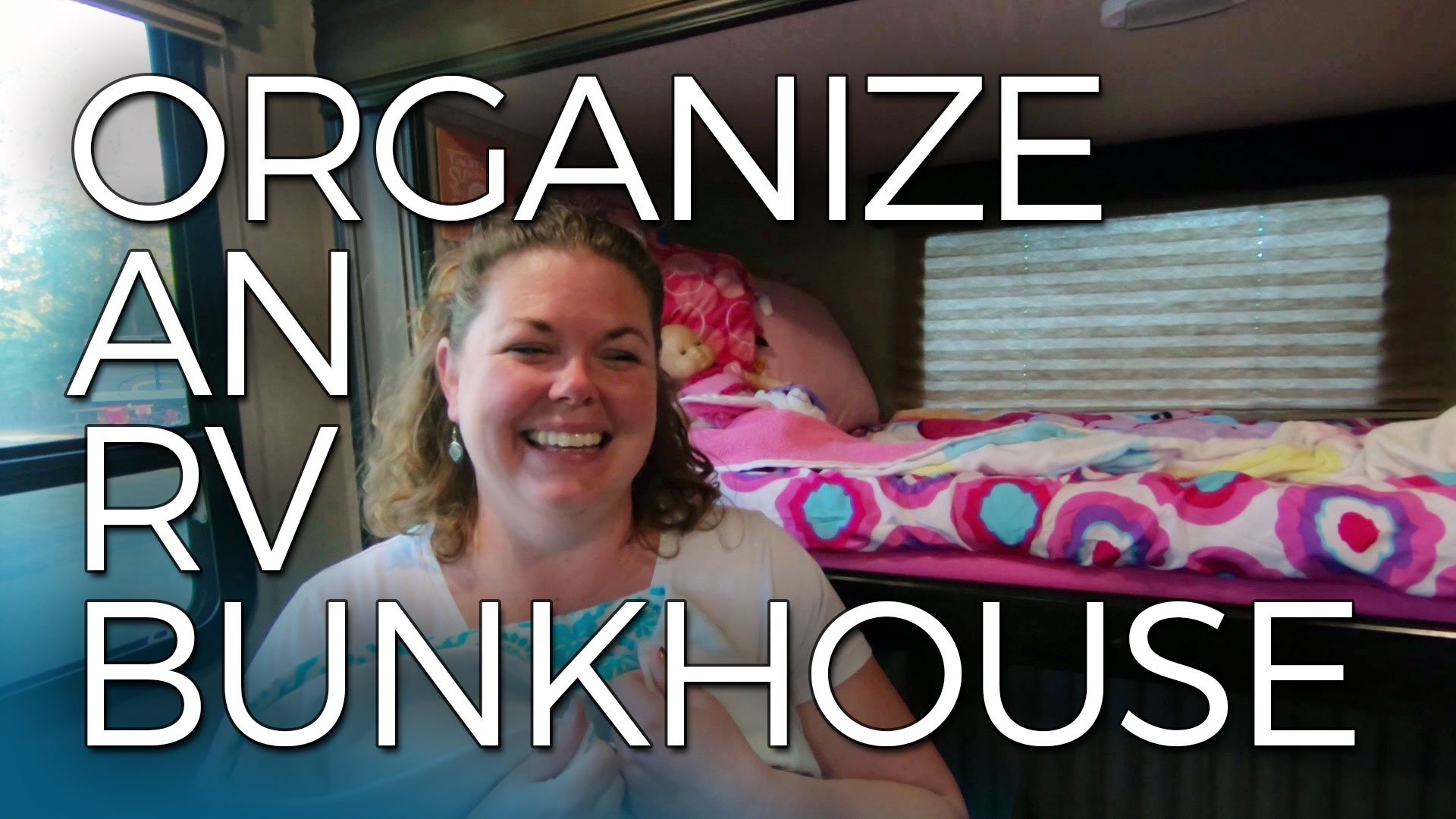 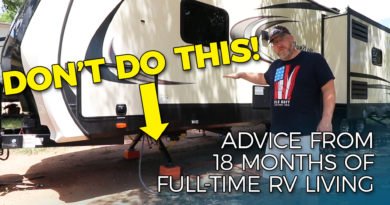 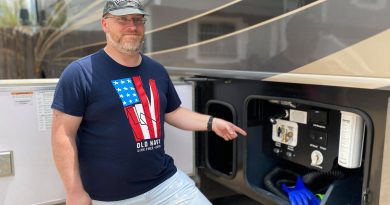 RV Essentials for Newbies: Outfitting a New Rig With Our Favorite Gear